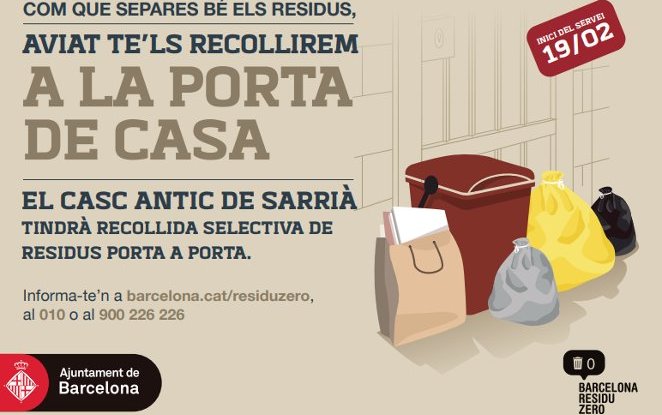 On 19th February 2018 the district of Sarrià-Sant Gervasi, located in the historic district of Sarrià of Barcelona, introduced ​​the door-to-door separate collection system, promoted by the association "Asociación de Vecinos de Sarrià" in the framework of the "Zero waste" strategy of the municipality.

The project has the aim of minimizing the quantity of waste sent to landfill and involving citizens by making them aware of the fate of waste and the environmental and social consequences of a lack of separation collections, in order to promote a substantial cultural change.

The information campaign began last October, followed by the distribution of all the tools necessary for a proper waste management, such as bins for domestic collection and bags. The collection of organic waste will be setup with MATER-BI bags, which will be distributed by the municipality during the first year. Thanks to their renewable origins and their biodegradability and compostability proprieties, bags made of MATER-BI not only improve the management of organic waste, but can also be transformed into compost, a valuable soil improver, thus contributing to the fight against desertification of soils and reducing CO2 emissions.

The new collection method will involve in its first phase 8,500 inhabitants, but the intention is to expand this model in other neighborhoods and eventually to the whole city of Barcelona, in order ​​to bring recycling rate from the current 36% to 60 %, thus achieving the results of the most virtuous European cities such as Milan.